Giving Adhan When A Baby Is Born 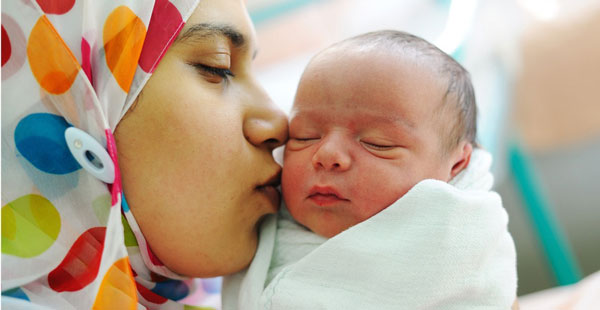 All praise is to Allah. Blessings and peace be on the Messenger of Allah, his household and companions.

It is recommended (mustahabb) according to the Hanafi school (and similarly the Maliki, Shafi`i and Hanbali schools), to call adhan in the right ear of the newborn [Ibn `Abidin, Radd al-Muhtar] and then iqamah in the left ear [Qari, Mirqat ; Kashmiri, al-`Arf al-Shadhiyy ]. It may be noted that the evidence for the subsequent iqamah in the left ear is weaker than that for the adhan in the right ear, and thus some scholars mention only the adhan for the newborn. [e.g. see Nawawi, al-Majmu` ]

It is reported that Abu Rafi` (a Companion) said, “I saw the Messenger of Allah (may Allah bless him and his household and grant them peace) give adhan in the ear of al-Hasan, the son of `Ali, when Fatimah gave birth to him.”

This hadith is recorded by al-Tirmidhi, Abu Dawud, Ahmad, al-Hakim and al-Bayhaqi, and is one of the stronger hadith on the subject. Hafiz al-Tirmidhi judged it as authentic, but in reality it contains some weakness, as was pointed out by al-Mundhiri and others. One of its narrators, `Asim ibn `Ubaydullah, was considered weak by some (but not all) hadith authorities, but he was not excessively weak nor an impugned liar.

Nevertheless, even if this narration is taken as weak, it is strengthened by other supporting narrations, as pointed out by `Allamah Mubarakpuri in Tuhfat al-Ahwadhi (his commentary on Sunan al-Tirmidhi), Shaykh `Abd al-Qadir al-Arna’ut (in his editor’s notes on Tuhfat al-Mawdud ) and others. It is generally accepted among scholars of hadith (as has been documented from Imam Ahmad, Sufyan ibn `Uyaynah, al-Tirmidhi and al-Bukhari) that a moderately weak hadith can become acceptable if there are sufficient supporting narrations.

Furthermore, Hafiz al-Tirmidhi has mentioned that “practice is upon it,” i.e. that the practice of the early Muslim community was in accordance with this hadith, indicating that this rite does have a basis.

Hafiz Ibn al-Qayyim, in his valuable book on the regulations relating to the newborn Tuhfat al-Mawdud bi-Ahkam al-Mawlud , has included a chapter entitled “Concerning the desirability of giving adhan in [the newborn]â€™s right ear, and iqamah in the left.” He cites three hadiths on the subject (of varying authenticities), and then proceeds to point out some of the possible deeper meaning and rationale behind this practice: that it is wise to ensure that the first words the baby hears are words containing the majesty and greatness of Allah, and a reminder of the testimony of faith by which one enters Islam, and with which one would be reminded by other Muslims close to oneâ€™s death. We also know (as narrated by Muslim) that every human being has one of the jinn accompanying him, and calling adhan to the newborn ensures that the call to goodness and true faith precedes the whisperings to evil that would later come from the accompanying devil. It is also established (as narrated by Bukhari and Muslim) that Satan runs away from adhan, and this reveals a further benefit.

We should point out that these rationales are not themselves proofs (such that if we did not have any hadiths on the subject, then such reasoning would not be sufficient to make the practice sunnah). Rather, given that a basis already exists for the practice, as mentioned above, these are beneficial insights and reminders. On a similar note, Shah `Abdul-`Aziz al-Dihlawi has speculated that the adhan and iqamah given at birth are quite possibly intended for the personâ€™s funeral prayer after death [Kashmiri, al-`Arf al-Shadhiyy ], for we know that there is no adhan and iqamah called for Salat al-Janazah, and death can strike at any moment.

How to give Adhan in Arabic, with Transliteration and meaning of the Azan in English.

Feed the Hungry, Help the Afflicted, Lighten the Sorrow of the Sorrowful