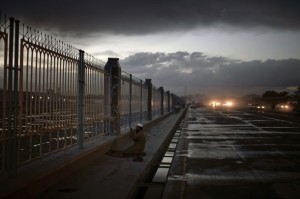 An Afghan Sunni Muslim man pauses his way to pray in front of a mosque at nightfall as the rain approaches in the old part of Kabul, on April 10, 2010. The US rolled out the red carpet for Afghan President Hamid Karzai as he started a four-day visit, hoping to patch up public spats that cast a shadow over joint war efforts. AFP PHOTO/Mauricio LIMA (Photo credit should read MAURICIO LIMA/AFP/Getty Images)