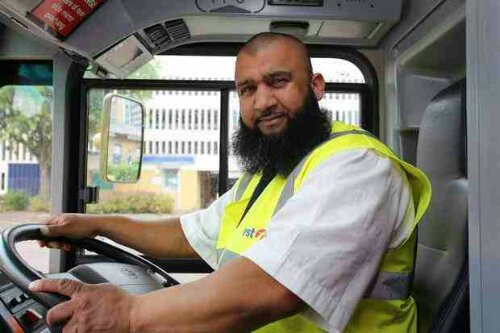 A London bus driver has managed to save the life of a woman in labor, rushing her to the hospital after she waited for more than 75 minutes for an ambulance close to midnight.

“She came on and said ‘baby’ and ‘hospital’ and was breathing quickly and heavily,” Sajjad Shariff told London Evening Standard on Thursday, December 19, referring to Fatim Faye.

The story began when Shariff, 41, was driving along a road in Leytonstone at about 11 pm.

Seeing Faye, a pregnant woman who looked in desperate need of help, he stopped and let her on.

The woman, 44, was forced to take her own way to hospital after she waited for an ambulance for an hour and 15 minutes.

Passengers got off the bus with only one woman, Bee Cole, stayed to offer help.

“It felt wrong to leave her, it was cold and it was not a very nice place to be about to have a baby,” Cole, 27-year-old woman from Leytonstone, said.

With no sign of an ambulance 30 minutes later, Shariff decided to drive the woman himself to the A&E at Whipps Cross Hospital, which was six bus stops away.

Reaching the hospital, Faye gave birth to a baby girl at 1.45am on December 12 and mother and baby are both said to be doing well.

As Sheriff saved the mother and child, London Ambulance Service tried to clear its image.

“The information initially given to our control room was that the patient was nine weeks pregnant,” a London Ambulance Service spokesperson said.

“This was corrected during a second call at 11.20pm, when it was explained she was nine months pregnant.

“The patient’s condition had not changed at this stage and she was fully conscious and breathing normally and was not categorized as being in a life-threatening condition.

“Unfortunately we did not have an ambulance available to send and were cancelled at 12.18am.

“We would like to apologize for any upset this may have been caused.”

Britain is home to a sizable Muslim minority of nearly 2.7 million, mostly of Indian, Pakistani and Bengali backgrounds.

In July 2012, a report by the Institute for Social and Economic Research at the University of Essex found that Muslims are the most likely of all groups to be identified with the concept of ‘Britishness.’

In 2011, think tank Demo found that Muslims in the United Kingdom are more patriotic than the rest of population.

Responding to the statement “I am proud to be a British citizen”, 83% of Muslims said they are proud of being British.

The percentage came higher than average across the population which scored only 79%.