Story of a Muslim Convert and A Nurse from UK 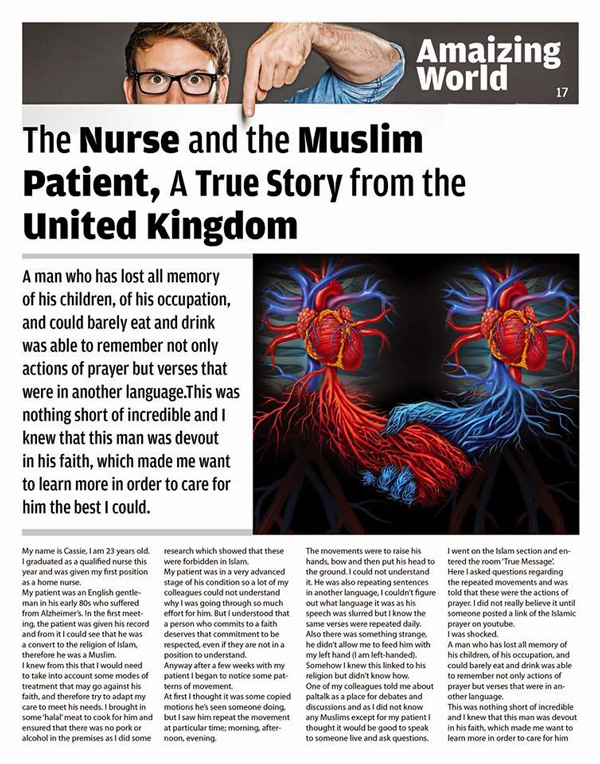 The Nurse and the Muslim Patient – A True Story from the United Kingdom.

My name is Cassie, I am 23 years old. I graduated as a qualified nurse this year and was given my first position as a home nurse.

My patient was an English gentleman in his early 80s who suffered from Alzheimer’s. In the first meeting, the patient was given his record and from it I could see that he was a convert to the religion of Islam, therefore he was a Muslim.

I knew from this that I would need to take into account some modes of treatment that may go against his faith, and therefore try to adapt my care to meet his needs. I brought in some ‘halal’ meat to cook for him and ensured that there was no pork or alcohol in the premises as I did some research which showed that these were forbidden in Islam.

My patient was in a very advanced stage of his condition so a lot of my colleagues could not understand why I was going through so much effort for him. But I understood that a person who commits to a faith deserves that commitment to be respected, even if they are not in a position to understand.

Anyway after a few weeks with my patient I began to notice some patterns of movement.

At first I thought it was some copied motions he’s seen someone doing, but I saw him repeat the movement at particular time; morning, afternoon, evening.

The movements were to raise his hands, bow and then put his head to the ground. I could not understand it. He was also repeating sentences in another language, I couldn’t figure out what language it was as his speech was slurred but I know the same verses were repeated daily.

Also there was something strange, he didn’t allow me to feed him with my left hand (I am left-handed).

Somehow I knew this linked to his religion but didn’t know how.

One of my colleagues told me about paltalk as a place for debates and discussions and as I did not know any Muslims except for my patient I thought it would be good to speak to someone live and ask questions. I went on the Islam section and entered the room ‘True Message’.

Here I asked questions regarding the repeated movements and was told that these were the actions of prayer. I did not really believe it until someone posted a link of the Islamic prayer on youtube.

A man who has lost all memory of his children, of his occupation, and could barely eat and drink was able to remember not only actions of prayer but verses that were in another language.

This was nothing short of incredible and I knew that this man was devout in his faith, which made me want to learn more in order to care for him the best I could.

I came into the paltalk room as often as I could and was given a link to read the translation of the Quran and listen to it.

The chapter of the ‘Bee’ gave me chills and I repeated it several times a day.

I saved a recording of the Quran on my iPod and gave it to my patient to listen to, he was smiling and crying, and in reading the translation I could see why.

I applied what I gained from paltalk to care for my patient but gradually found myself coming to the room to find answers for myself.

I never really took the time to look at my life; I never knew my father, my mother died when I was 3, me and my brother were raised by our grandparents who died 4 years ago, so now its just the two of us.

But despite all this loss, I always thought I was happy, content.

It was only after spending time with my patient that felt like I was missing something. I was missing that sense of peace and tranquility my patient, even through suffering felt.

I wanted that sense of belonging and a part of something that he felt, even with no one around him.

I was given a list of mosques in my area by a lady on paltalk and went down to visit one. I watched the prayer and could not hold back my tears.

I felt drawn to the mosque every day and the imam and his wife would give me books and tapes and welcome any questions I had.

Every question I asked at the mosque and on paltalk was answered with such clarity and depth that could do nothing but accept them.

I have never practiced a faith but always believed that there was a God; I just did not know how to worship Him.

One evening I came on paltalk and one of the speakers on the mic addressed me. He asked me if I have any questions, I said no. He asked if I was happy with the answers I was given, I said yes.

He asked then what was stopping me accepting Islam, I could not answer.

I went to the mosque to watch the dawn prayer. The imam asked me the same question, I could not answer.

I then went to tend to my patient, I was feeding him and as I looked in his eyes I just realized, he was brought to me for a reason and the only thing stopping me from accepting was fear…. not fear in the sense of something bad, but fear of accepting something good, and thinking that I was not worthy like this man.

That afternoon I went to the mosque and asked the imam if I could say my declaration of faith, the Shahadah.: lā ilāha illà al-Lāh, Muhammadun rasūlu Al-Lāh. There is no god except Allah, Muhammad is Allah’s messenger.

I cannot explain the feeling I felt when I said it.

It was like someone woke me up from sleep and sees everything more clearly.

The feeling was overwhelming joy, clarity and most of all…. peace.

The first person I told was not my brother but my patient.

I went to him, and before I even opened my mouth he cried and smiled at me.

I broke down in front of him, I owed him so much.

I came home logged on to paltalk and repeated the shahadah for the room.

They all helped me so much and even though I had never seen a single one of them, they felt closer to me than my own brother.

I did eventually call my brother to tell him and although he wasn’t happy, he supported me and said he would be there, I couldn’t ask for any more.

After my first week as a Muslim my patient passed away in his sleep while I was caring for him. Inna lillahi wa inna ilayhi rajioon.

He died a peaceful death and I was the only person with him.

He was like the father I never had and he was my doorway to Islam.

From the day of my Shahadah to this very day and for every day for as long as I live, I will pray that Allah shows mercy on him and grant him every good deed I perform in the tenfold.

I loved him for the sake of Allah and I pray each night to become an atoms weight of the Muslim he was.

Islam is a religion with an open door; it is there for those who want to enter it…. Verily Allah is the Most Merciful, Most Kind.

* Note * Our sister Cassie passed away October 2010 Inna lillahi wa inna ilayhi rajioon, after she gave da’wa to her brother, who had accepted Islam Alhamdulillah.
[Source: a da’wa organization in the UK]

The Story of Prisoners of the Battle of Badr